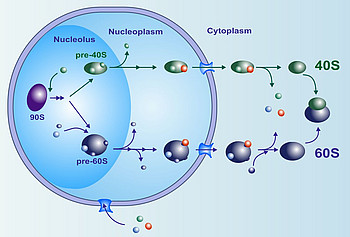 The synthesis of ribosomes is one of the major and most energy consuming activities of eukaryotic cells and is tightly coupled to cell growth. Fast growing and dividing cells, including cancer cells, rely on the massive production of ribosomes, whereas arrested or starving cells halt the production of new ribosomal subunits. Hence a constant supply of the building blocks of ribosomes, i.e. ribosomal RNA and ribosomal proteins, is crucial for optimal cell growth. A major challenge of ribosome biogenesis is the correct structural assembly of four ribosomal RNAs with about 80 ribosomal proteins. This process involves the action of almost 200 non-ribosomal factors that participate at different stages of pre-ribosome maturation, but are not present in the mature ribosome. 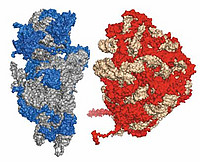 Eukaryotic ribosomes consist of a large 60S and a small 40S subunit. The assembly pathway is conserved among eukaryotes and is best studied in yeast. Formation of ribosomal subunits starts in the nucleolus with the transcription of a ribosomal RNA precursor and the co-transcriptional association of ribosomal and non-ribosomal proteins. Further maturation includes the processing and correct folding of the rRNA, the stepwise association of ribosomal proteins, and the release of non-ribosomal proteins after they have performed their functions. These events take place while precursor particles transit from the nucleolus to the nucleoplasm and are then exported into the cytoplasm. Ribosomal subunits that are released into the cytoplasm are still infunctional and require  a number of further RNA processing and modification, restructuring and protein release events until they attain translation competence. 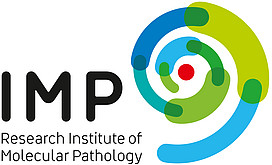